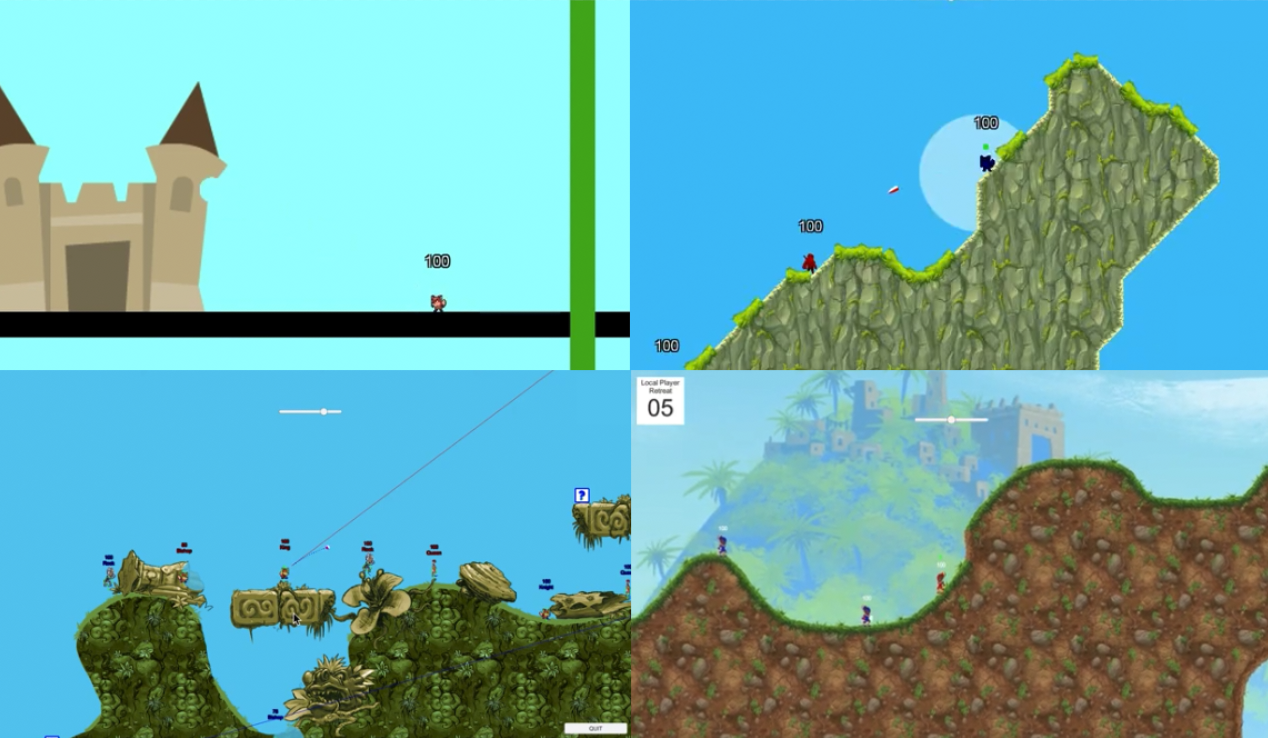 From the idea, through prototypes, all the way to a playable demo!
Let’s see how far we are after 4 months.

A little bit of history: Artillery Royale started in January, I mean, it’s been in my head for a long time but I started to write down some stuff in January 2020 and I decided in May to give it a go by working on it full time.

Also, because I know projects work better with a scope, I arbitrarily decided to fix a deadline for the first playable demo to September 2020.

In may I was playing with Unity own Physics engine and thought it would be easy. I also used an asset that allows getting destructible sprite very easily but, rests assured, all this will be soon discarded.

I also had a first prototype of map generator based on bitmap at the time. See details here.

If I remember well, in June I had my first game over the Internet with a friend. It was laggy as hell and I did not see how it could improve with my technical choices at the time. So I discarded all the networking part too.

I still was trying to get Unity Physics engine work the way I wanted, and it was quite convincing. I built a specifics scene to test all the parameters and stuff.

This is when I decided to implement the distance limit, here with a halo that prevents you to move more than a specific distance. After testing it for a while, I’m pretty sure it won’t end up in the game in that form.

What an exciting month! In parallel to coding the game, I was also looking for a designer to help me work on the game. I found someone that has the exact style I wanted and he accepted to work for me.

We can see in those videos some of his concept art. Except that I started to tackle the hard problem: implementing my own Physics engine.

With Jean-Baptiste, we settle down on Anima2D for the character animation and it’s pretty cool because I had some time to test some sort of ragdoll animations — something I always wanted to have — on this video, it looks stupid and full of bug but the final implementation will be great. I also worked on my own Character movement controller.

In the last video, we can see that I started to integrate the final art from Jean-Baptiste. The map generator has to be tweaked a bit more too.

To be honest with me I’m not even halfway to have something ready but I hope that in September I’ll get some sort of demo.

Today I spent way too much time on my character movement controller. It turns out, this part is more complicated than I expected. But it’s so important to get it right, that I took the time, and spent a bunch of days working on it.

At first, I was a little bit disappointed that something so basic was not included in the game engine. So I browsed the asset store and tried a few assets with no success.

The problem, kin of “as usual” is that I want something very specific with a certain feel to it, and even if most of the assets were configurable I never found the right combination. I decided to give it a try myself.

I’m a little torn, in a way it was not so hard to do, but on the other, I had to deal with so many cases. As you may know from my article on my technological choices I decided to handle most of the physics myself. So that was some work to get the character to collide with stuff and bounce when projected.

These days I’m lucky enough to spend time with a great artist: Jean-Baptiste Dessaux (Jb for short). He is going to work on the graphic side of Artillery Royale.

I’m very happy that this part of the project is moving forward!
We are going to try to answer some critical gameplay questions; for example the proportion of the character versus the map or the style of the game.

In classic artillery games, players often move military tanks (or in the particular case of the Worms series: worms). These characters are slow, which gives artillery all its meaning.

In Artillery Royale, the characters are not intended to move slowly, they are humanoids. This could be a gameplay problem. Indeed if the player can quickly move his characters close to those of the other player, why would he use artillery rather than nearby weapons?

That’s partly why we have another gameplay mechanism: distance limits per character. For example, the bishop can move a certain distance, the knight a bit more, etc (it’s because the game has some chess board game roots). But even for me, it seems a little bit odd.

We will see how it goes!

By working with Jb I came to realize that doing a map generator is probably too early for the game. I’ll go for a pre-built map so the gameplay can be tested in advance. It’s always sad to remove features from the codebase but that’s how programs/projects dev work.

I paused a bit some dev things to focus on helping him deliver. And then I could integrate his work into the game to see everything came to life.

This article will be updated as I add parts to the game.
Last update was on the 30th of October 2020

In this blog post, I will talk about the technological choices I made and go deeper in some technical details about the game.

The game is based on the Unity engine which allows you to export on all platforms, from PC/Mac to consoles via mobile platforms.
I made that choice because I know Unity quite well and I like coding in C#. But to be honest, everything is not perfect in the Unity world.

I love Unity because it’s very easy to get started with, there are plenty of online tutorials and examples, and the assets store has some good gems. All this gets you to pass the prototype phase pretty quickly.

I hate Unity because they have different ways to do the same thing (usually they buy some popular asset, integrate it in the software and that’s it, they do not remove the part it replaces). They also sometimes remove features without giving anything in replacement (last example with the networking part).

When I started the game, I thought “it’s going to be easy because Unity has all the needed tools including a good 2D physics engine”. But after a while playing with it, I found a bunch of blocking limitations.

First, it’s very hard to customize, you can play with physics materials and change the mass, friction, and all those variables, even the gravity scale itself. But still, in the end, it’s a bunch of variables that you’ve changed here and there. You get easily confused and it’s not even practical to test.

Second, and that was the blocker, the Physics engine is non-deterministic. It means that given a set of inputs (i.e.: force, mass, and start position) if you play it two times, you will probably not have the same output. Unfortunately, this is not compatible with Artillery Royale Gameplay. If a player at some point has a good aim, now the right force and play the same move again, they should get their bullet at the very same spot.

You will see that the deterministic part is even more important because of network implementation.

So I took some time to re-implement basic physic equations but kept some of Unity existing pieces like colliders and collision resolutions.

About the destructible map

I found a great asset on the store that allows you to take any Sprite and make it destructible. I bought it without even thinking and at first, I was in love.

But after some prototyping, I found out that because the asset was working on pixels and not shapes it would never render the way I wanted.

So I made my own destructible map which is based on Sprite Mask and custom polygon colliders, all of this is easily done with Unity and a bit of shape math.

I made some new prototype with a new solution of my own, tailored for that particular game. Indeed, being a turn-based game, I will go for a “turn replay” mechanism: the idea is to record the turn of the player (with a specific optimized stream format) and broadcast it to the other player in near real time. This will also allow keeping a record of any game for later replays.

You can now see how important it is to have deterministic physics, so I don’t need to record every movement in the replay stream. 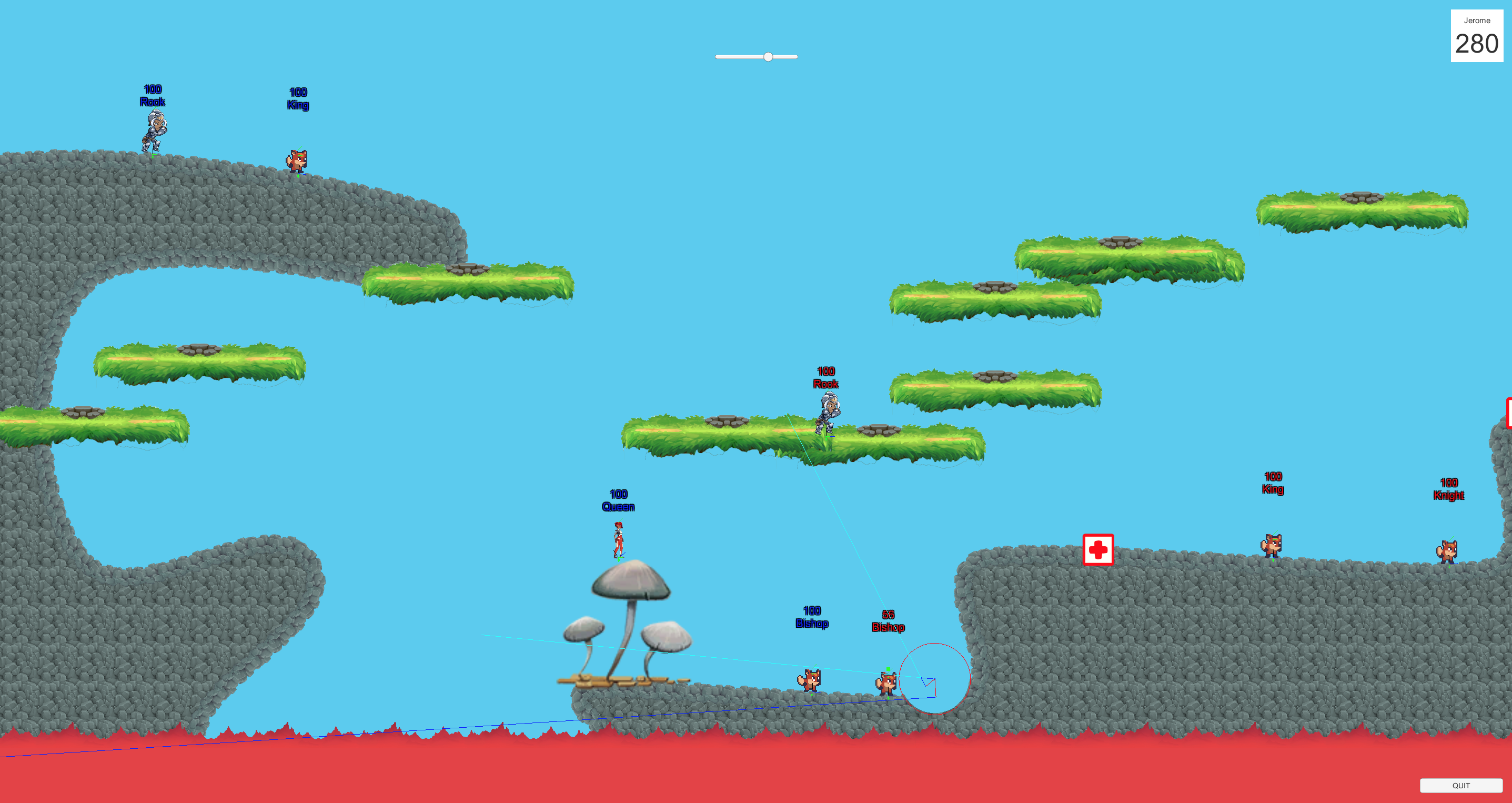 Generating a good random map is a very hard job!

First I started with bit maps (a map is build from an array of bit, like a black/white image).

I used a bunch of technics to get something interesting (both in term of gameplay but also graphically):

With some tweaks and the right amount of smoothing I think it gave some good result.

But when you have to move your character on these maps it’s quite challenging, and I was wondering how I can have something better on that side and keep some of the interesting shapes?

I experimented with something I call a “combinatory” map.
It’s a name I made up, I did not see any reference online talking about this approach.

The idea behind it is to take some basic shapes, like rectangles, triangles, and circles in different sizes and positions, and merge them into a single block.

If you apply some smoothing, you get something really convincing (IMHO). And this time it’s easy to navigate. Too easy probably.

When working on an important part of a game, it’s always good to ask for external feedbacks. So it’s what I did when I started to work with Jean-Baptiste the designer.

We came to the conclusion that the solution will be to mix the combinatory approach and some pre-made elements like platforms or other static objects.

Building a good random map generator is very hard, on this blog post I’ve shown you only the good results, but you can be sure that one out of two tries leads to some weird and probably unplayable map.

I’m going to work harder on this topic, but it will not be included in the playable. On this demo, you will find a handcrafted static map, tested for playability and fun!